Tyrone Ashley – Looks Like Love Is Here To Stay – U.A.

Tyrone Ashley was born Sammy Campbell born in Plainfield, NJ. He recorded under his birth name until 1971 when he cut a single for Phil-La of Soul Records in Philadelphia. The Del Larks formed around 1958 and comprised Samy Campbell, Ronald Taylor, James Anderson, Mert Matthews and Raymond Davis. They hit locally around 1958-1959 with “Bubblegum Doll,” and “Lady Love,” on East West Records distributed by Atlantic; and enjoyed success as Sammy & the Del Larks with “I Will Never Forget” on Ea-Jay, and “Little Darling,” on Stop Records. Sammy wrote and produced for “Smoke” records, then formed his own label, Queen City Records, and released “SOS of Love,” but it was the second “Job Opening” that the label is best known for. He only pressed 1,500 copies. After a short venure out west, he struck a deal with “Phil La Of Soul” records, who released “Let Me Be Your Man” by Tyrone Ashley in 1971, after 1 more release on the label,  he then concentrated on writing and producing other artists. Around 1975, Ian Levine found him, and as Tyrone Ashley scored a minor hit in Britain with “Feet Start Movin’. This disc from 1978 is in EXCELLENT condition. 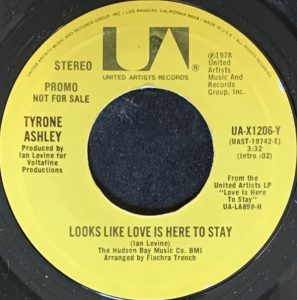 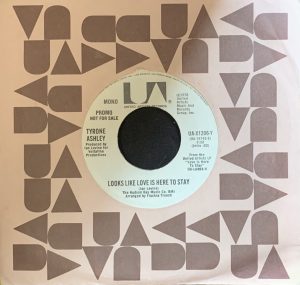