Tyrone Fettson was born on May 4th, 1938 in Greenville, Mississippi, moving to Chicago in 1959. On his early records he was billed as “Tyrone The Wonder Boy”, and in 1968 he was signed to “Dakar” records and changed his name to Tyrone Davis, borrowing producer Carl Davis’ last name. Davis released about 25 singles during his seven years with Dakar, most of them big sellers produced by Willie Henderson. He finally returned to the top spot with “Turning Point” in 1975. Soon afterwards, Davis moved to “Columbia” records, putting out seven albums over the next five years. In 1982 he moved to “Highrise” records, then “Ocean Front” records the following year, “Ichiban” records in 1993, then “Malaco” records in 1996. Tyrone Davis sadly died on February 9th, 2005. This disc from 1981 is in EXCELLENT condition 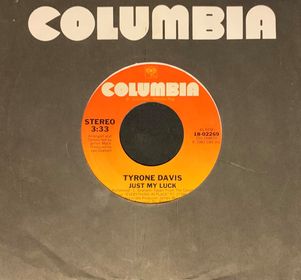