The Untouchables were from Los Angeles, California, formed in 1959 and comprised Brice Coefield, Chester Pipkin, Don Trotter, Ed Wallace and Sheridan Spencer, recording under the direction of Herb Alpert and Lou Adler. In 1960 Chester Pipkin’s brother Gary Pipki replaced Sheridan Spencer for just one single before the line-up turn back to the initial members. After a few releases on “Madison” records, Adler secured the group some studio sessions with Screen Gems, which  issued a few releases from the sessions without their knowledge as The Happy Tones. In March of 1961, the group moved to “Liberty” records and issued a few releases, after which they renamed the group The Elektras. This disc from 1961 has light wear, with some sticker residue, conservatively graded between VG+ and VG++ condition, worth checking out the flip too 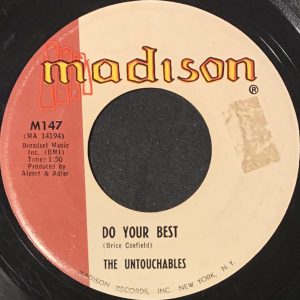