In 1967 The Chi-lites, a very popular vocal group from Chicago, came to Kansas City to perform at the Town Hall Ballroom. The Promoter, Willie Cyrus, added the group The Mists, comprising Eugene Smiley Sr., Ray Foreman, Wilbur Taylor, Daryl Pinrice to perform also. After the performance, They hooked up with the Chi-lites and met and got acquainted with Eugene Record, lead vocalist, writer, arranger for Brunswick Records. The group was invited to come to Chicago and audition at Brunswick Records. The Mists were signed to Brunswick sub-label Dakar Records. After they recorded their first 45 they became known as The Visitors. A few singles were cut but after the contract expired in 1973, the group disbanded. This disc from 1968 has some light, superficial scuffs whilst still retaining loads of gloss, conservatively graded between VG+ and VG++ condition, backed with a stunning Soul ballad “Until You Came Along” 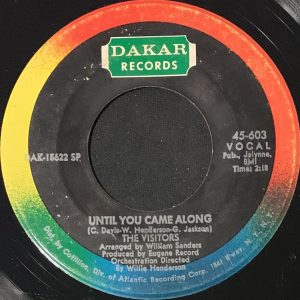