Wanda Lavonne Jackson was born on October 20th, 1937 in Maud, Oklahoma, moving to Bakersfield, California, during the 1940s. Jackson began her professional career while still attending Capitol Hill High School in Oklahoma City after being discovered by Hank Thompson in 1954, who heard her singing on a local radio station, KLPR-AM, and invited her to perform with his band, the Brazos Valley Boys. She recorded a few songs on “Capitol” records, then signed with “Decca” records. In 1956 she signed with “Capitol” records , recording a massive catalogue of singles and albums throughout the decades, mainly with Rockabilly, Country and Gospel material. This disc from 1961 has superficial scuffs, whilst still retaining gloss – Conservatively graded in VG+ condition 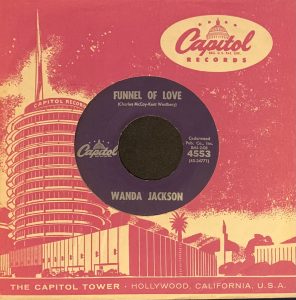