Winfield Parker was born in Cooksville, Maryland. In 1960 he joined Sammy Fitzhugh & the Moroccans, who cut sides for “Poplar” records and “Atco” records. After recording some sides for the local “Rujac” records, he moved up to Philadelphia, where he recorded for “Arctic” records, “Wand” records, “Spring” records and “GSF” records. Winfield continued to keep performing on a regular basis, opening for The Temptations, Four Tops, Shirelles, Lou Rawls, William Bell, Carla and Rufus Thomas, Sam & Dave and Baby Washington amongst others!! In the mid 1970’s he was lead vocalist for “Best Of Both Worlds”, recording for “Calla” records, returning as a solo performer for his own “P & L” records before turning his attention to Gospel music. This disc from 1969 has staining, wear and a bit of biro on the labels, with some unfeelable light scratches on the vinyl, whilst still maintaining a lot of “gloss” – Conservatively graded between VG and VG+ condition. GREAT Funk backed with a classy slab of Soul on the flip 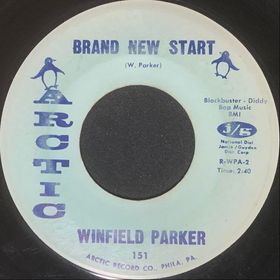