MD113 Bottom and Company – You’re messing up a good thing 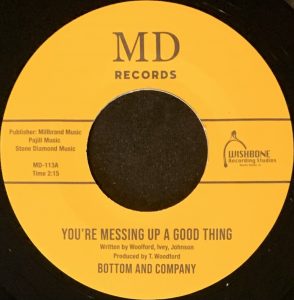 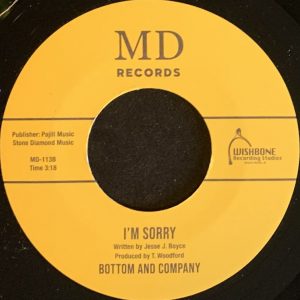 Its not often that we have a conversation with Jordan where we don’t come away feeling like we have been through a whirlwind of inspiration and ideas. One particular conversation led to a discussion about new tapes he had acquired and one in particular from the Wishbone production company.

Wishbone was the name of a production company and studio owned by Terry Woodford and Clayton Ivey. These guys worked at Muscle Shoals and went on to be snapped up by Motown as writers and producers before moving on to start their own studio.

This band is known, has some great tracks but never got the backing it deserved to go the distance. With only a handful of released tracks to their name Motown didn’t get behind them. Imagine our excitement when Jordan starts to play the tracks from the tape and there are 2 unreleased tracks on it. Following a quick chat and verification that they were unreleased; we started to hunt down the rights.

Following an intensive week or so of conversations, Terry not only agreed to work with us but then proceeded to share his knowledge and catalogue with us to see what else might make it to vinyl for the first time.

This is a great double sider with the A side being a fabulous 70s/modern version of a classic track that was also sung by Bobby Sheen and Bobby Womack. There is every possibility that this is the first recorded version of this masterpiece of 70s soul.

Flip it over and the skilful writing of JJ Boyce is delivered through a soulful group harmony track that is a fabulous balance to the powerful A side.