Elbowed Out – All Men Don’t Love The Same – Soul Junction

Soul Junction’s involvement with Elbowed-Out stretches as far back as 2012 when during the licensing of the hugely popular Oliver Cheatham release “Don’t Pop The Question (If You Can’t Take The Answer), we were first introduced to Detroiter William . R. Miller (Bill) the songs producer and Oliver’s cousin.

Bill who by then had moved to the West Coast subsequently offered us some previously unissued tracks on a little known group, Elbowed-Out.

Elbowed-Out were a group of mixed race musicians out of Seattle, Washington state.

A working group who had performed in Seattle, the town of Juneau in Alaska, across the border in Canada, and later on in Japan, where they built up quite a following.

2013 heralded the first release of two Elbowed-Out’s unissued songs as a vinyl 45, the two excellent dancers “Taking A Step/Girl You Got Magic” (SJ523) featuring Sam Chambliss on lead vocals. Followed in 2014 by a second 45 featuring another dance track “Things Are Changing” this time with Denis Wilcox on lead b/w the soulful ballad “Just To Be With You” (SJ527)with Sam Chambliss again on lead, both hugely popular sellers.

Due to the group’s new found popularity, I had toyed with the idea of a third 45 release of a further two strong tracks but felt that this would weaken the impact of the forthcoming planned CD album of the groups entire body of work, so at that juncture it never happened. 2015 saw the release of Elbowed-Out’s first album “Everybody Get Up” (SJCD 5010) primarily aimed at the Japanese market where it sold very well.

Fast forward to 2020 and with the CD album all but sold out, the niggling idea to release a third 45 returned. So before you now you have the two strong tracks originally kept back for the album, the uplifting late 70’s dancer “All Men Don’t Love The Same” backed with “ the early 80’s sophisticated stepper “Believe It “ both featuring Sam Chambliss on lead vocals. Such is the quality of these two tracks it really did come down to the toss of a coin as to which song was used as the A-side.

Elbowed-Out’s mission in life was “to get you up and out of your seat, and then to begin to move your feet” something I think you’ll agree they most certainly have achieved. 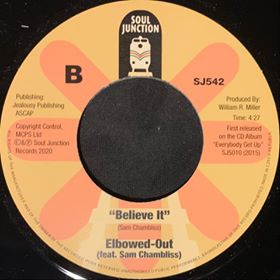 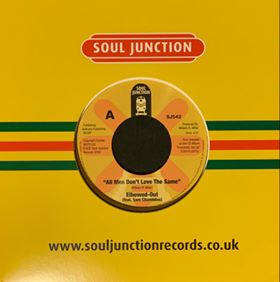