Counts – What’s It All About – Soul Junction

The Fabulous Counts were originally a teenage instrumental group of five musicians, Mose Davis (Organ and Piano), Demetrius ‘Demo’ Gates (Alto Saxophone and vocals), Jim White (Tenor Sax), Andrew T. Gibson (Drums) and Raoul Keith Mangrum (Percussion and Flute) who were later joined by the older, more experience Leroy Emanuel (Guitar and vocals). Emmanuel was invited into the group as it’s band leader by the groups manager Fred McClure, a former Detroit boxing champion who also happened to be the manager of another popular Detroit group the singing Metro’s of the hit recording “Sweetest One” fame and their subsequent respected RCA album of the same name. The Fabulous Counts would often perform at shows as the Metro’s backing band.

The Fabulous Counts first big break came after knocking several Detroit Record labels doors. They were eventually invited in by Ollie McLaughlin’s Moira studio to record, under the tutelage of Popcorn Wylie the one take hit “Jan, Jan (Moira-103). A further two Moira 45’s followed of which “Get Down People/Lunar Funk “(Moira-108) also scored high on the R&B charts. Through a deal arranged by McLaughlin The Counts released their respected “Jan, Jan” album on the Atlantic distributed Cotillion label in 1969. Moving on to Armen Boladian’s Westbound label, during 1970 the group simply changed their name to The Counts and charted with their 1971 “What’s Up Front” Westbound album, also releasing a solitary 45 “Thinking Single/Why Not Start All Over Again”. In 1972 while still part of the Westbound set up The Counts recorded two major label 45’s under the pseudonyms of Bad Smoke “Crawl Ya’ll Part 1&2” (Chess-2124) and Lunar Funk “Mr Penguin Part 1&2” (Bell 45-172), the latter being thier biggest hit. A subsequent move to Atlanta, GA saw The Counts sign with Michael Thevis’s Aware records where they recorded a further two successful albums “Love Sign” (1973) and “Funk Pump” (1975), plus a string of 45’s. In 1976 although officially never breaking up The Counts members went their separate ways to explore different life opportunity’s.

During 1978 and while still in Atlanta Leroy Emanuel borrowed money from his family and reuniting with his fellow Counts, Mose, Demo, and Jimmy Jackson Jr, they, accompanied by a local strings section recorded a session of material that spawned two songs “What’s It All About” and “Motorcity”. Which Leroy later made a deal with Terry Mendelson to release on a 45 on his TM label. The Counts had previously known Mendelson through his brother Bernie at Westbound. The TM 45 made very little noise with many of the copies having mispressed labels. Although later reissued and mistakenly credited as two previously unissued Westbound recordings on several latter Cd compilations it came to light that quite a few avid European soul collectors actually owned copies of this high quality, very elusive and desirable 45! With demand still seemingly high it seems a good time for Soul Junction to reissue it. The A-side, “What’s It All About” features its composer Leroy Emanuel on lead vocals with the other Counts adding to the backing chorus. The flipside of this 45 from the same session is the previously unreleased Mose Davis penned “Watch The Clock” which is more in keeping with the Counts traditional funk groove, enjoy. 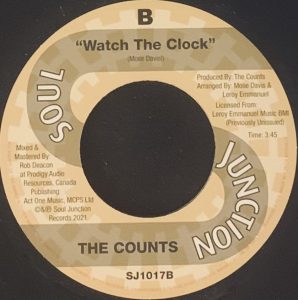