Herbert Earshell Johnson Jr. was born on December 26th, 1935 in Elizabeth City, North Carolina, relocating to the City of Brotherly Love at the age of nine. At 18 he joined the U.S. Air Force, performing R&B covers on USO package tours as a member of a group called the Lyrics; following his discharge, he returned home to Philadelphia, joining vocal group the Ambassadors. In 1960 he signed as a solo act to Len “Buddy” Caldwell’s “Len” records, and released “Guilty”/”Have You Heard” which sold over 50,000 copies in Philadelphia alone. In 1961 he recorded on Caldwell’s “V Tone” records and then “Palm” records     from there, Herb and his backing group, the “Impacts – guitarist Bobby Eli, bassist Wally Osborne, keyboardist Charlie “Teach” Peoples, drummer Howard “Little” Rice and saxophonist Curtis Brooks,  went to “Arctic” records and then “Swan” records. In 1968 Wally Osborne formed his own label, “Toxan” records, for which Herb recorded “I’m So Glad”, which got national distribution via “Brunswick” records.  Herb opened an ice cream shop, and in 1972, he cut his farewell record “Damph F’Aint,”. In 2003  after a revival of interest in Herb’s work, he cut his final new song “Make You Wanna Holler,” recorded with Finland’s Soul Investigators and issued on “Timmion” records. Herb lost his long battle with cancer and sadly died on January 19th, 2004. This disc is in EXCELLENT condition!! 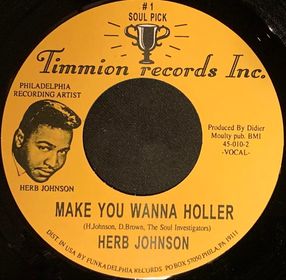 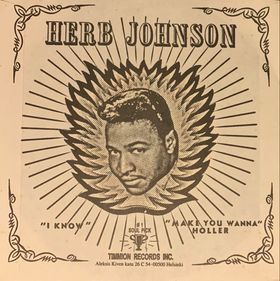