Willie Williams – Give It All I Got – Soul Junction

Blind, Chicago soul singer Willie Williams was first discovered performing in clubs in and around the Windy City. He was signed to ABC records by their A&R Director for the Midwest Johnny Pate a former Jazz bassist, independent producer, arranger and songwriter in his own right. Pate was a friend and colleague of fellow musician, songwriter and founding member of one of ABC’s prolific vocal groups The Trends, Tom Dorsey. Pate and Dorsey would contribute heavily as writers and producer throughout Willie’s recording career, beginning with his first ABC 45 release in 1966 “Have You Ever Been Played For A Fool/With All My Soul”. The release’s b-side became a popular radio play at the time with Willie becoming known as Willie “Soul” Williams for a while. Two further ABC releases were to follow “It Doesn’t Pay/Just Because” (1967) and “I’m Through With You/Strung Out” (1968).

Willie’s next 45 release although recorded in Chicago under Johnny Pate’s supervision found it’s way to another major label, RCA, although credited as a GWP Production (Gerrard W. Purcell). The 45 in question being the excellent Tom Dorsey penned songs “Just To Be Loved By You/Name It” released during 1969. Two Willie Williams 45 releases did appear on the Gamma label but I’m unsure if one or both of these are by the same Willie Williams in question. Throughout his recording career Willie continued to work the clubs with his own band which was led by his bass guitarist and confidant Bradley (Brad) Bobo a man who featured as a session musician on many recording sessions including the creation of The Notation’s album of the same name for Curtis Mayfield’s Curtom subsidiary label Gemigo.

On the 22nd of December 1970 a recording session was held in RCA’s Studio B, on North Wacker Drive, Chicago with sound engineer Russ Vestuto. The session was financed by Tom Dorsey who amongst other song writing gratuities had been paid handsomely for the 3 songs “Love Machine”, “My Baby’s Love” and “How Are You Fixed For Love” which he had wrote and contributed to the blue-eyed hit group, The O’Kaysion’s “Girl Watcher” ABC album. The result of this session yielded four Willie Williams tracks. Brad Bobo played bass guitar on the session, the composer of the four songs Tom Dorsey supplied the arrangements and Tom’s wife Carolyn (also a former group members of The Trends) joined both he and Brad on backing vocals.

The four songs were then offered to Eddie Thomas who chose two of them to release on a 45 single. The two songs being “Must Mean Love which was later renamed “The Baa Baa Song “and “Psyched Out” which Eddie then released on his own Lakeside label, thus leaving the two other songs to remain unissued in the can.

Willie has now sadly passed away but in his later life once the opportunity’s for performing artists began to dwindle he chose a different path in his life, gaining a Doctors degree, he went on to become a College Lecturer. Tom Dorsey too turned his back on the music industry apart from his publishing company to concentrate on his family life as well as founding a very successful business involving one of his other great life passions, photography. Luckily for us he never lost the master tape of Willie’s sessions and after several years of tentative enquiries he graciously relented to my request to put them out. So now before you we have the two excellent previously unissued Willie Williams songs that Eddie Thomas passed on, the delightfully soulful “Give It All I Got” backed with the funky, social conscience themed “Do You Understand”, lost early 1970’s Chicago Soul at its finest. 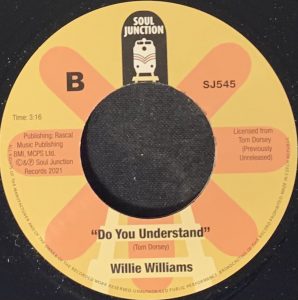 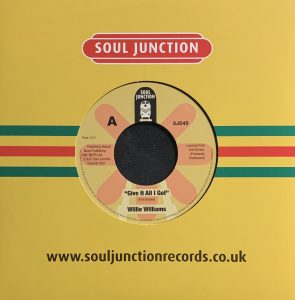